You are here: Home / Archives for Office

Our installation meeting was as ever held in Arthur square and was well attended by lodge members and also visiting Bretheren. With VWB Mal Ross in attendance WB Rennie McGrath installed our new Master in impeccable style, we were also very fortunate to have WB Tim Whiteside stand in as director of ceremonies and he made sure everything went according to plan.

After our meeting we had a thoroughly enjoyable dinner and were joined by more non-Masonic guests. WB McBride was piped in by 3 pipers to a round of applause from all the Bretheren and visitors.

With a master’s song delivered by WB McGrath & more musical entertainment from our pipers, speeches from RWB Mal Ross and out outgoing WM a thoroughly enjoyable evening was had by all.

After the last 2 years interruption to our regular meetings everyone agreed that it was great to be together again and we are all looking forward the year ahead under our new WM.

Our new Worshipful Master W. Bro. Stephen Abrol was installed on Saturday 25th January 2020. The Lodge was honoured by the presence of many distinguished Brethren.
The Installing Officer was congratulated by all on an excellent Installation ceremony.
The W. Master then installed his Lodge Officers for 2020 in an exemplary manner and he and his officers received fraternal greetings and very best wishes from visiting Brethren representing many Lodges.
At the Festive Board after the meeting, our Piper W, Bro. David Beggs piped the W. Master, and Deputy Grand Master into dinner. Forty-five Brethren and guests enjoyed an excellent meal, with Toasts, and enjoyable speeches. The master’s song was beautifully sung by
W. Bro. Rennie McGrath of the Belfast Lodge 651.A charity collection and raffle in aid of Masonic charities was generously supported by all.

Our new Worshipful Master W. Bro. Paul Francey was installed on Saturday 26th January 2019. The Lodge was honoured by the presence of the Deputy Grand Master of Ireland R. W. Bro. Rodney McCurley, and Assistant Provincial Grand Master of Antrim R. W. Bro. Ivan Gillespie, and other distinguished Brethren.
The Installing Officer W. Bro. Genesis Nazareth was congratulated by all on an excellent Installation ceremony.
The W. Master then installed his Lodge Officers for 2019 in an exemplary manner and he and his officers received fraternal greetings and very best wishes from visiting Brethren representing twelve Lodges.
At the Festive Board after the meeting, our two Pipers W. Bro. William Cardwell and W, Bro. David Beggs piped the W. Master, and Deputy Grand Master into dinner. Fifty-five Brethren and guests enjoyed an excellent meal, with Toasts, and enjoyable speeches. The master’s song was beautifully sung by
W. Bros. Rennie and Gardiner McGrath of the Belfast Lodge 651.A charity collection and raffle in aid of Masonic charities was generously supported by all.

Sunday 11th November 2018, the 100th Anniversary of the Armistice marking the end of the first world war.
In Belfast W. Bro. David Beggs our Lodge Almoner placed a wreath at City Hall on behalf of all the Lodges meeting at Freemasons’ Hall, Arthur Square Belfast.
Wreaths were also laid on behalf of the Belfast Masonic Widows Fund, Belfast Masonic Charity Fund, The Trustees of Freemasons’ Hall, Arthur Square. 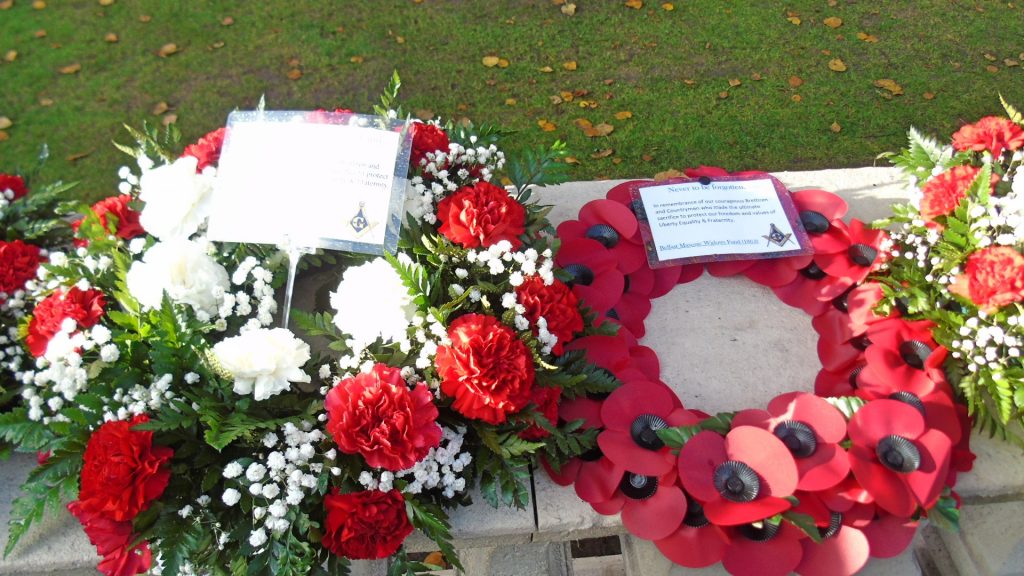 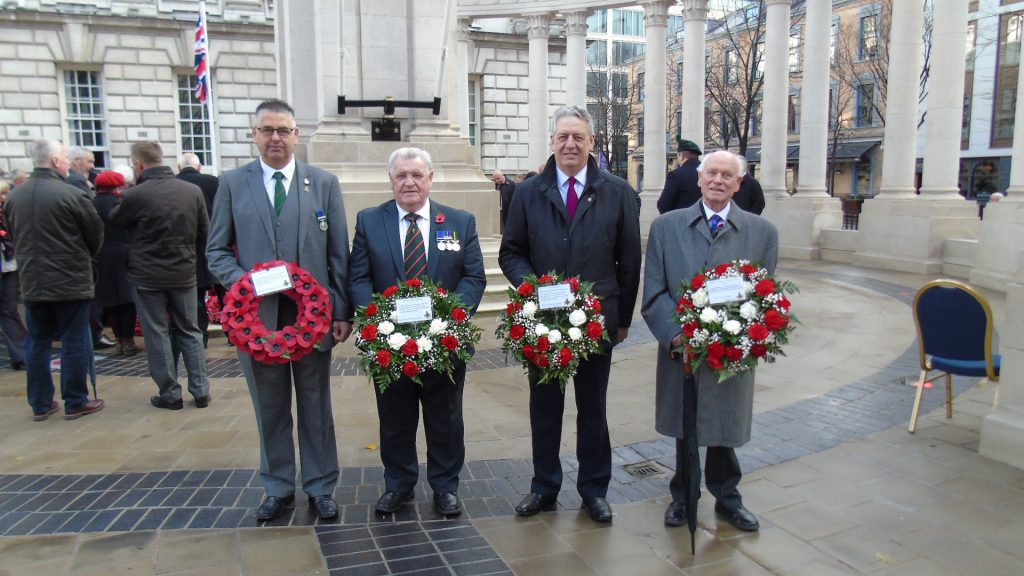 Act of Remembrance was held on Friday, 9th November 2018 at 12 noon in the Grand Lodge Room, Freemasons’ Hall, Dublin

The Act of Remembrance included a wreath-laying ceremony led by the Grand Master. and senior Officers including the Prov. Grand Master of Antrim. .Our Lodge Chaplain W. Bro. Patrick Elliott laid a wreath on behalf of the W. Master and Brethren of Sir George Clark Memorial Lodge 669 Irish Constitution. 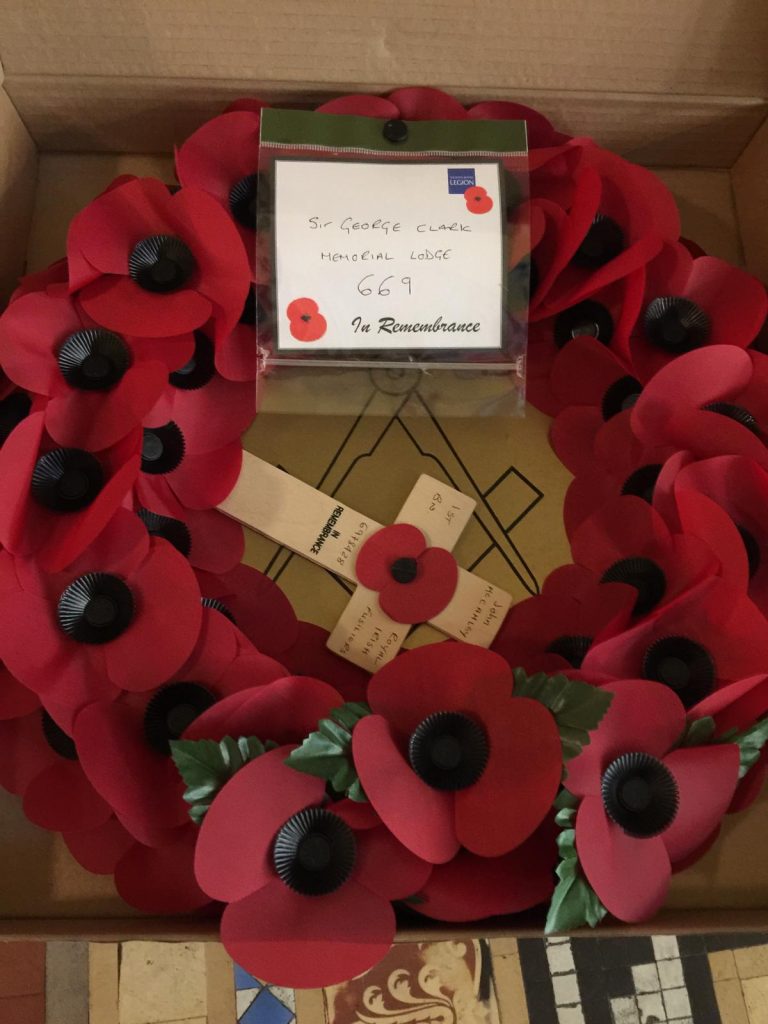 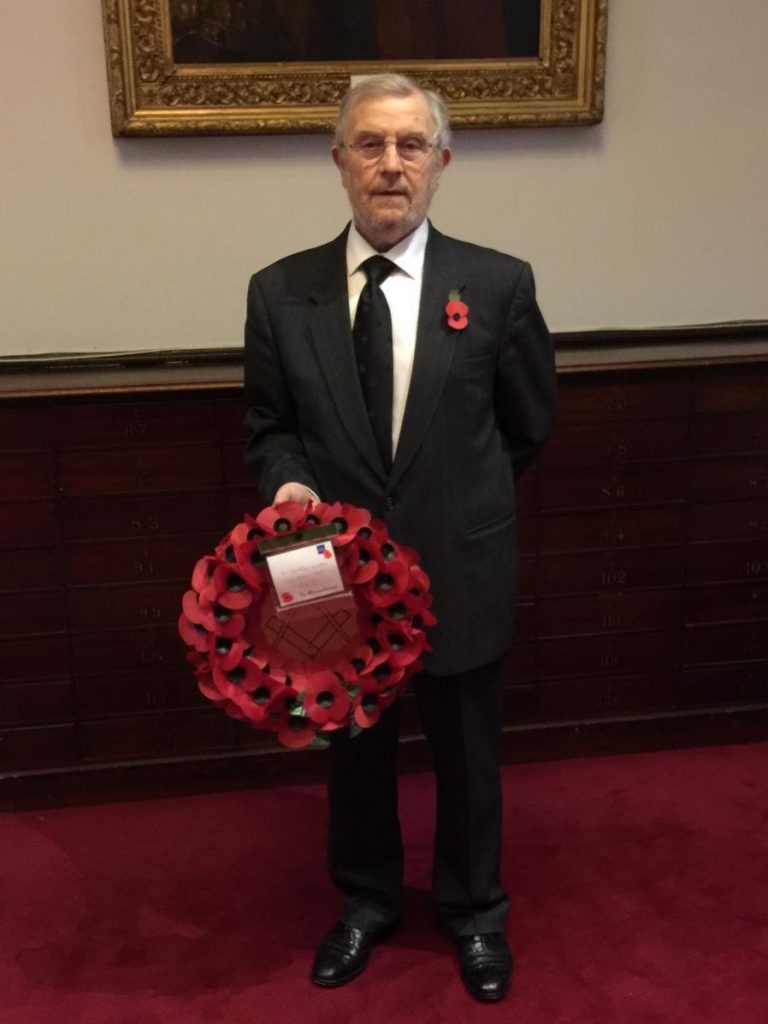 W. Bro. Robert McRoberts and Bro. Calvert McRoberts, two brothers who joined Lodge 669 (their father’s Lodge) on the same day in March 1968 were presented by the W. Master with their Grand Lodge of Ireland 50-year membership jewel and certificate and a Lodge 669 tie.
Bro Calvert McRoberts was accompanied by his son Bro. Neil McRoberts a Fellowcraft who is a member of the Ulster Lodge 2972, London, UGLE.
Two other McRoberts sons joined us for an excellent Festive board after the October 2018 meeting. Congratulations to the McRoberts family circle! 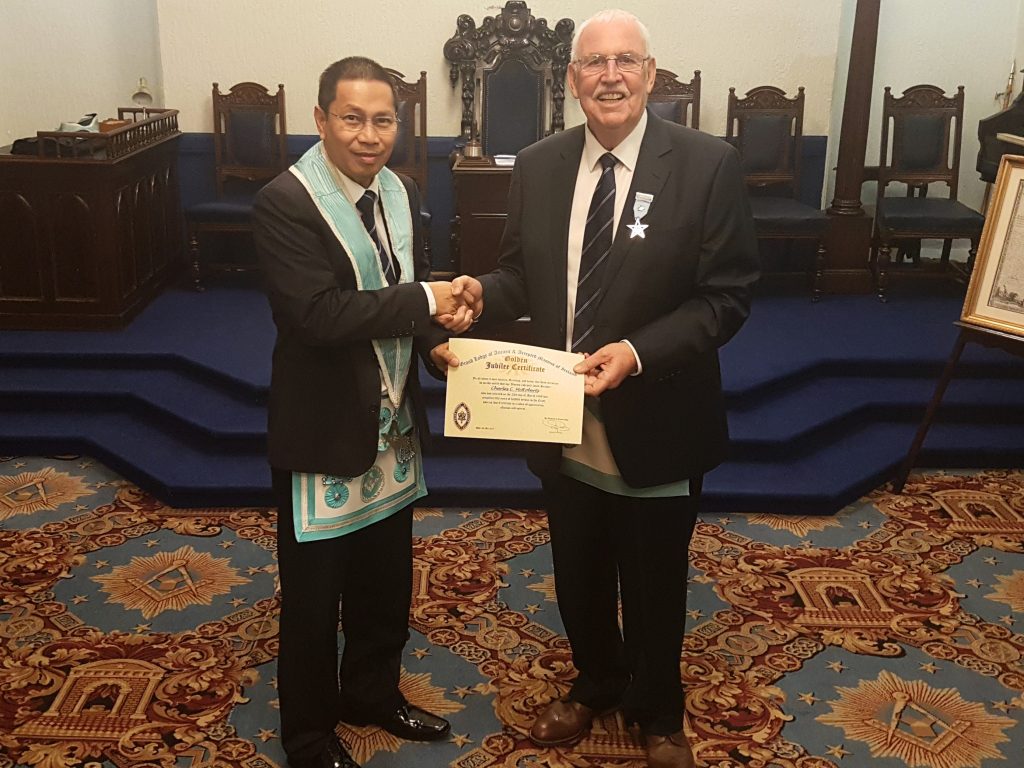 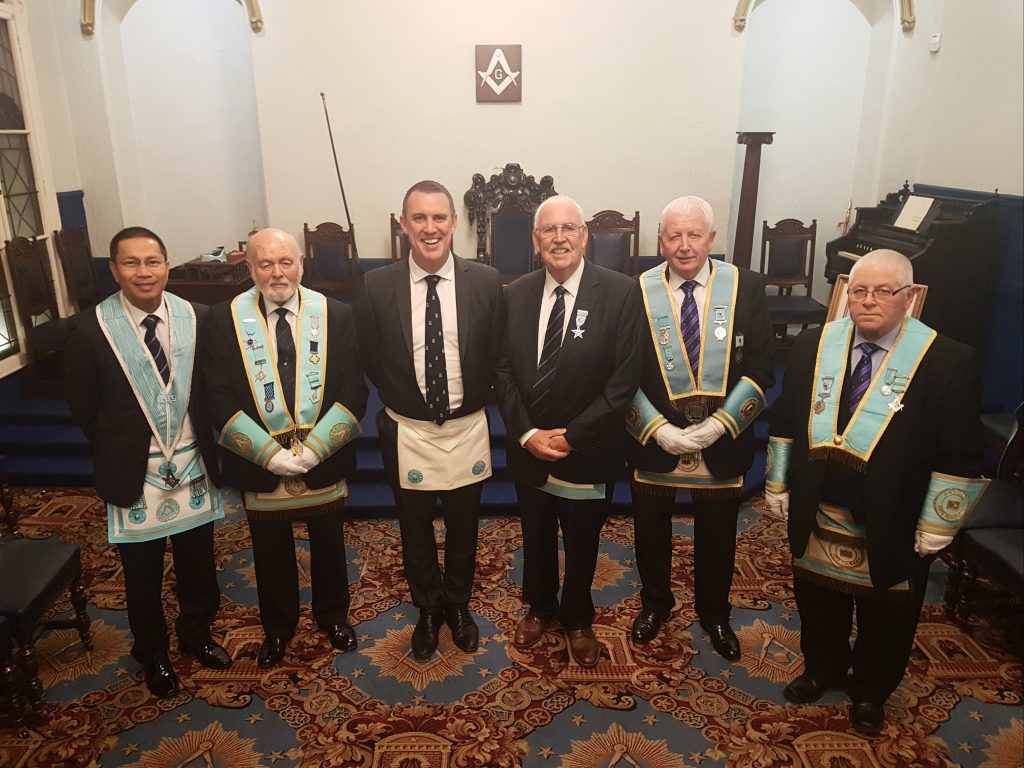 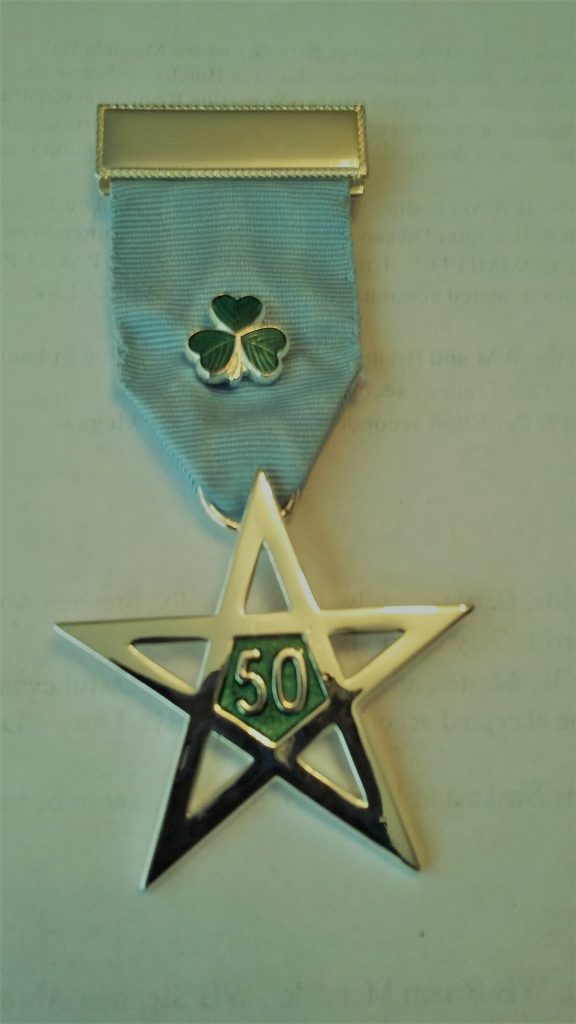 Freemasonry is one of the world’s oldest and largest non-religious, non-political, fraternal and charitable organisations. Its roots lie in the traditions and ceremonies of the medieval stonemasons who built our cathedrals and castles. Some rituals are still celebrated today.

Freemasonry has always been about making good men better. Individuals aim to shape their lives around five core principles.

Integrity: We say what we mean, and we keep our promises.

Kindness: Although our families come first, we believe in playing a key role in our communities and give time and money to charitable ventures.

Honesty: We pride ourselves on openness, about what being a Freemason means for us.

Fairness: We treat everyone as equal – we listen to others, explore any differences and look for common ground.

Tolerance: We respect the opinions of others and behave with understanding towards them.

IS FREEMASONRY FOR ME? 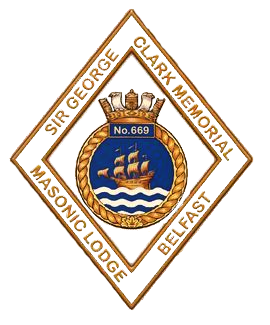 Our Lodge meets on the 4th Saturday every month except June, July and
August, at 6:30 pm in the Leighton room of Freemasons' Hall, Arthur Square, Belfast, Northern Ireland

Many people assume that to become a Freemason,​ ​a man must​ ​be invited to join. This is not​ ​so, in fact, while members might encourage their friends to join, they do not typically recruit or invite candidates for membership.

If you are interested in joining us, we encourage you to simply ask any Freemason. If you don’t know a member and wish to join​, please email us via our Secretary HERE with your name, and contact details.
After each Lodge 669 meeting, we have an informal meal which applicants can also attend to meet the Lodge members, and enjoy some excellent food and good company.
We look forward to meeting you.

“There are no strangers in Freemasonry, only friends you’ve yet to meet.” George Washington

This year’s annual ladies night has been scheduled for 17th October and will be held again in the Park Avenue Hotel. More details to follow……….