You are here: Home / Links 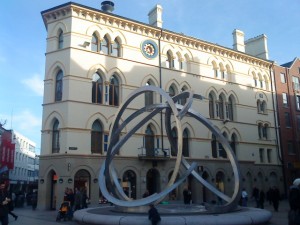 Re-opened September 2007, after a £2 million refurbishment. Centrally located in the historical heart of Belfast (in 1798, Henry Joy McCracken, a mason and a United Irishman was hanged in adjacent Corn Market), and now the gateway to the spectacular Victoria Square shopping development,

Freemasons’ Hall was originally designed and built by Sir Charles Lanyon, renowned architect of Queen’s University and many other landmark buildings.

Freemasons’ Hall, Arthur Square is available to a broad range of groups and organizations for corporate events, meetings, large and small social gatherings, etc., and offers a key address for collection box distribution, survey collation and much more…

The format of this publication is Portable Document Format (.pdf) file. To access a .pdf file you will need to have Adobe Acrobat Reader .
You can get a FREE copy by Clicking Here.

Regular meetings will be on the 3rd Thursday every month, except June, July, August, and usual starting time is 8pm

The Lodge aims to maintain and enhance the excellent social life, which has developed at Freemasons’ Hall, Newry,by organising events at which both Masons and non-Masons are welcome. A BBQ, will be an annual event to raise money for’Lodge Charities’ and other non-Masonic charities.

Meets 4th Tuesday of each month other than June through August at 7.30pm.The Stokes Room, Freemasons’ Hall, Arthur Square, Belfast

The Warrant No. 322 from the Grand Lodge of Ireland, dated 3rd May 1759 was issued for a Masonic Lodge in the British 29th Regiment of Foot. The Glittering Star Travelling Masonic Lodge is still closely associated with the Regiment.
During the Boston Massacre in 1768 the 29th along with the 14th Regiment of Foot were sent to Boston, Massachusetts, where, on the evening of March 5, men of the 29th Grenadier Company under the command of Captain Thomas Preston took part in the Boston Massacre in which five colonists died during a riot in front of the Boston customs house. Due to the incident, the regiment earned the nickname the “Vein Openers” for drawing first blood in the American Revolution. Glandore Lodge No. 551

Meets on the fourth Thursday of each month from September through to May, in Freemasons’ Hall, Arthur Square, Belfast, at 7 o’clock.

Meets on the 2nd Tuesday, September through to May at 7.30pm

This dynamic young Lodge, under the Irish Constitution, takes its name from Belfast, the capital city of Northern Ireland and the Belfast Lodge No 257 when it merged with ‘Finaghy Masonic Lodge No 651′.
The Lodge meets in the heart of Belfast, in Freemasons’ Hall, Arthur Square.

Lodge 696 is warranted on the roll of the Grand Lodge of Ireland in the Province of Down and meets on the first Friday of the month at 8:00 pm.

The Ulster Masonic Lodge No. 2972 UGLE

For over 100 years The Ulster Lodge has been an important part of London Freemasonry. They meet four times a year at Freemasons Hall, Great Queen Street, WC2. Details of future meetings are listed on their diary page. Visitors from other Lodges are always warmly welcomed.

Stated Meetings are the Third Monday of each month at 7:30 PM, except July and   August.